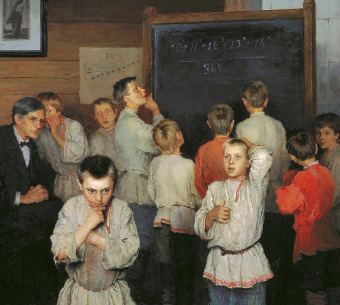 The most appropriate word for today's situation of education in Latvia is “a disaster”.

Latvia has its own unique live experience in science and education, yet it does not apply it. Instead, it is using a system that is wide-spread in the West. Meanwhile (and it can be a surprise for most of people) education in schools, colleges and Universities in the West is in even worse condition than here in Latvia. And I've experienced this personally.

One and a half years ago I graduated from Plymouth University (UK) with a degree in BSc (Hons) Computer Science. The rating of this University was far away from being the worse and it was said to be the main University for programmers in the region. Nevertheless, after three years of my studies, I came to a conclusion that education level was lower than in Riga programming courses for people studying in schools. I would call education in Plymouth a pure surrogate.

It turned out that English students that are studing Computer Science in this University didn't learn Maths or Physics, furthermore they didn't even study main principles of programming itself, such as algorithms and data structures.

Well, we had a module called “Mathematics” during first year. It last for 3 months. Lecturer started the first lecture by pointedly writing this expression on the blackboard: “2 + 3 ∙ 4” and asking the audience: “May be someone already knows the answer?”. Thank god, someone answered that it was 14. Then the lecturer began to explain in detail that we should multiply at first and only then we should add, but if we had “2 + 3” inparentheses, we would have to do the addition first. I heard an abstruse phrase “operator precedence” in the course of these arguments, but not more than that.

I passed the external exam. It was a test and they gave us 2 hours to finish it. In Latvia we would be given only 15 minutes for such a test. The most difficult task for this exam was to substitute numbers into a formula from the law of sines and calculate the answer on a calculator (without which, by the way, it is prohibited to attend the exam). The formula was also given in the text of the task.

I had already learned programming at a high level before applying to the University and I didn't have a chance to learn Higher Mathematics in the UK (it is simply not taught there). To somehow fill the gap in education, I enrolled in Riga Transport and Telecommunication Institute on the “Electronics and Electrical Engineering” course. But here I encountered, though not with such terrifying, but also strongly noticeable regression.

During one of the practical lessons of Mathematics, the teacher began frantically turning the pages in her thick notebook to find the next example and write it on the blackboard. Suddenly, she sighed and said: “In 2005 you would have solved all of these excercises, but now the number of hours in Mathematics is reduced in a so terrible way that we are skipping all of them. See how long I leaf through?” As it turned out, the Institute is trying to increase the number of hours of teaching Mathematics, but accrediting bodies do not allow them to do so. Does this mean that the authorities deliberately destroy the education system, created so much difficulty?

By the way, some time ago the school did not consist of 12 grades, as of now, but only 10 (in Latvian schools it was 11, due to a more in-depth study of the Russian language). And during these 10 classes students somehow managed to pass a lot more topics, and the result was much higher.

In all human development, everything must take place in due time. By the end of grade 12, student is already 19 or even 20 years. This means that up to 20 years people are living off the parents and do not show enough independence, which in turn leads to the fact that many children remain to be infantile during all their lifes. Isn't this what is necessary for the modern ruling elite?

Unfortunately, the British and other Western experts in education give their instructions not only to Latvian Universities, but also, for example, are imposing some “innovative” methods of teaching arithmetic and mental arithmetic. In accordance with these methods, the child should play a special computer game where he/she has to shoot at the “right answer.” They say, the information is better absorbed like that. Fortunately, so far these methods are rejected by our conservative teaching staff with quite a violent reaction. But it is yet.

I am convinced that education (including higher education) should be absolutely free. This is the only way to achieve liberation and awakening of higher creative abilities in every person. I believe that there is a “hidden” genius in every person.

Everything that such people were touching was turned in a masterpiece. Meanwhile, they were just people, but well grown up and well educated. You can talk about genetic predispositions, but these can be found and awaken in every person! This is the ideal that a high word “education” should serve to.

It is important to note that education is inextricably linked with upgrowing. It is not enough to just give a child an opportunity to learn, it is also necessary to encourage the child for learning. Young children (and sometimes adults) are not always able to perceive high motivation (“if you learn well, you will be smart”), so often child refuses to learn without trying. In such cases, our law requires teacher to let it go: “If a child doesn't want to learn, it is his wish, do not force him.” Unfortunately, too many parents also insist on it. But doing so, we commit a crime against a child, deprive it of “the road in the future”.

Kudos to those teachers who, despite everything, for many years, alone, are fighting for the future of our children. But alone they will not achieve a result, the society must help them.