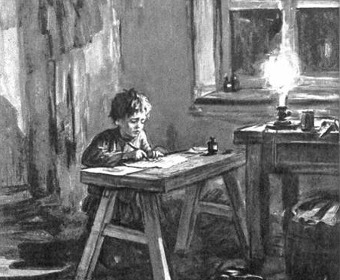 Nine-year-old Vanka Zhukov, who had been apprentice to the shoemaker Aliakhin for three months, did not go to bed the night before Christmas. He waited till the master and mistress and the assistants had gone out to an early church-service, to procure from his employer's cupboard a small phial of ink and a penholder with a rusty nib; then, spreading a crumpled sheet of paper in front of him, he began to write.

Before, however, deciding to make the first letter, he looked furtively at the door and at the window, glanced several times at the sombre ikon, on either side of which stretched shelves full of lasts, and heaved a heart-rending sigh. The sheet of paper was spread on a bench, and he himself was on his knees in front of it.

“Dear Grandfather Konstantin Makarych,” he wrote, “I am writing you a letter. I wish you a Happy Christmas and all God's holy best. I have no mamma or papa, you are all I have.”

Vanka gave a look towards the window in which shone the reflection of his candle, and vividly pictured to himself his grandfather, Konstantin Makarych, who was night-watchman at Messrs. Zhivarev. He was a small, lean, unusually lively and active old man of sixty-five, always smiling and blear-eyed. All day he slept in the servants' kitchen or trifled with the cooks. At night, enveloped in an ample sheep-skin coat, he strayed round the domain tapping with his cudgel. Behind him, each hanging its head, walked the old bitch Kashtanka, and the dog Viun, so named because of his black coat and long body and his resemblance to a loach. Viun was an unusually civil and friendly dog, looking as kindly at a stranger as at his masters, but he was not to be trusted. Beneath his deference and humbleness was hid the most inquisitorial maliciousness. No one knew better than he how to sneak up and take a bite at a leg, or slip into the larder or steal a muzhik's chicken. More than once they had nearly broken his hind-legs, twice he had been hung up, every week he was nearly flogged to death, but he always recovered.

At this moment, for certain, Vanka's grandfather must be standing at the gate, blinking his eyes at the bright red windows of the village church, stamping his feet in their high-felt boots, and jesting with the people in the yard; his cudgel will be hanging from his belt, he will be hugging himself with cold, giving a little dry, old man's cough, and at times pinching a servant-girl or a cook.

“Won't we take some snuff?” he asks, holding out his snuff-box to the women. The women take a pinch of snuff, and sneeze.
The old man goes into indescribable ecstasies, breaks into loud laughter, and cries:
“Off with it, it will freeze to your nose!”

He gives his snuff to the dogs, too. Kashtanka sneezes, twitches her nose, and walks away offended. Viun deferentially refuses to sniff and wags his tail. It is glorious weather, not a breath of wind, clear, and frosty; it is a dark night, but the whole village, its white roofs and streaks of smoke from the chimneys, the trees silvered with hoar-frost, and the snowdrifts, you can see it all. The sky scintillates with bright twinkling stars, and the Milky Way stands out so clearly that it looks as if it had been polished and rubbed over with snow for the holidays…

Vanka sighs, dips his pen in the ink, and continues to write:

“Last night I got a thrashing, my master dragged me by my hair into the yard, and belaboured me with a shoe-maker's stirrup, because, while I was rocking his brat in its cradle, I unfortunately fell asleep. And during the week my mistress told me to clean a herring, and I began by its tail, so she took the herring and stuck its snout into my face. The assistants tease me, send me to the tavern for vodka, make me steal the master's cucumbers, and the master beats me with whatever is handy. Food there is none; in the morning it's bread, at dinner gruel, and in the evening bread again. As for tea or sour-cabbage soup, the master and the mistress themselves guzzle that. They make me sleep in the vestibule, and when their brat cries, I don't sleep at all, but have to rock the cradle. Dear Grandpapa, for Heaven's sake, take me away from here, home to our village, I can't bear this any more… I bow to the ground to you, and will pray to God for ever and ever, take me from here or I shall die…”

The corners of Vanka's mouth went down, he rubbed his eyes with his dirty fist, and sobbed.

“I'll grate your tobacco for you,” he continued, “I'll pray to God for you, and if there is anything wrong, then flog me like the grey goat. And if you really think I shan't find work, then I'll ask the manager, for Christ's sake, to let me clean the boots, or I'll go instead of Fedya as underherdsman. Dear Grandpapa, I can't bear this any more, it'll kill me… I wanted to run away to our village, but I have no boots, and I was afraid of the frost, and when I grow up I'll look after you, no one shall harm you, and when you die I'll pray for the repose of your soul, just like I do for mamma Pelagueya.

“As for Moscow, it is a large town, there are all gentlemen's houses, lots of horses, no sheep, and the dogs are not vicious. The children don't come round at Christmas with a star, no one is allowed to sing in the choir, and once I saw in a shop window hooks on a line and fishing rods, all for sale, and for every kind of fish, awfully convenient. And there was one hook which would catch a sheat-fish weighing a pound. And there are shops with guns, like the master's, and I am sure they must cost 100 rubles each. And in the meat-shops there are woodcocks, partridges, and hares, but who shot them or where they come from, the shopman won't say.

“Dear Grandpapa, and when the masters give a Christmas tree, take a golden walnut and hide it in my green box. Ask the young lady, Olga Ignatyevna, for it, say it's for Vanka.”

Vanka sighed convulsively, and again stared at the window. He remembered that his grandfather always went to the forest for the Christmas tree, and took his grandson with him. What happy times! The frost crackled, his grandfather crackled, and as they both did, Vanka did the same. Then before cutting down the Christmas tree his grandfather smoked his pipe, took a long pinch of snuff, and made fun of poor frozen little Vanka… The young fir trees, wrapt in hoar-frost, stood motionless, waiting for which of them would die. Suddenly a hare springing from somewhere would dart over the snowdrift… His grandfather could not help shouting:

When the tree was down, his grandfather dragged it to the master's house, and there they set about decorating it. The young lady, Olga Ignatyevna, Vanka's great friend, busied herself most about it. When little Vanka's mother, Pelagueya, was still alive, and was servant-woman in the house, Olga Ignatyevna used to stuff him with sugar-candy, and, having nothing to do, taught him to read, write, count up to one hundred, and even to dance the quadrille. When Pelagueya died, they placed the orphan Vanka in the kitchen with his grandfather, and from the kitchen he was sent to Moscow to Aliakhin, the shoemaker.

“Come quick, dear Grandpapa,” continued Vanka, “I beseech you for Christ's sake take me from here. Have pity on a poor orphan, for here they beat me, and I am frightfully hungry, and so sad that I can't tell you, I cry all the time. The other day the master hit me on the head with a last; I fell to the ground, and only just returned to life. My life is a misfortune, worse than any dog's… I send greetings to Aliona, to one-eyed Tegor, and the coachman, and don't let any one have my mouth-organ. I remain, your grandson, Ivan Zhukov, dear Grandpapa, do come.”

Vanka folded his sheet of paper in four, and put it into an envelope purchased the night before for a kopek. He thought a little, dipped the pen into the ink, and wrote the address:

The village, to my grandfather.

He then scratched his head, thought again, and added: “Konstantin Makarych.” Pleased at not having been interfered with in his writing, he put on his cap, and, without putting on his sheep-skin coat, ran out in his shirt-sleeves into the street.

The shopman at the poulterer's, from whom he had inquired the night before, had told him that letters were to be put into post-boxes, and from there they were conveyed over the whole earth in mail troikas by drunken post-boys and to the sound of bells. Vanka ran to the first post-box and slipped his precious letter into the slit.

An hour afterwards, lulled by hope, he was sleeping soundly. In his dreams he saw a stove, by the stove his grandfather sitting with his legs dangling down, barefooted, and reading a letter to the cooks, and Viun walking round the stove wagging his tail.

This post has not been translated into English yet. If you know Russian or Latvian language, you can help our organization by translating this text into English and emailing it to us at [email protected]. We will be very grateful for it.