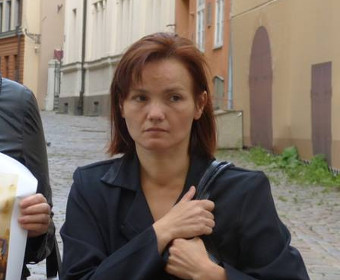 On the 19th of August 2014, in front of Riga Orphan’s Court there took place a protest organized by Grigory Fed’kin in support of Karina Saliga whose two sons Elisei and Matvey were removed from the family in April this year by a mobile brigade consisting of seven police officers and two social workers.

The reason why children were removed from the family was a complaint filed in social services by the school principal. As Karina Saliga, the mother of three children explained, her daughter Elizabeth has been bullied at school, and Elizabeth’s father went there to sort things out. Elizabeth’s class teacher considered that during their conversation the father has exerted an emotional pressure and complained to the school principal who, in her turn, decided to deal with a ‘disagreeable’ parent filing a complaint. In the complaint, she has mentioned that, if he dared to show disrespect to the teacher, then, he is definitely dangerous for the children, and it should be checked out whether or not there is an emotional violence at home.

The inspection ended up with the removal of Karina’s two sons. The reason has been voiced much later and defined as a fraudulent evasion of collaboration with social services, which practically means going through humiliating procedures of parental adequacy and competency psychological assessments – in a letter signed by A. Krasnogolovs himself, Karina was blamed for lacking skills to bring up her children. Understandably, because of their inexperience, parents supposed that if they avoided any contacts with inspectors who have suddenly appeared in their life the latter would back off. Nothing of the kind! At a hearing held at Orphan’s Court, the parents were deprived of parental rights (or, in the modern sense of the term – child custody) in absentia.

That was the very reason why the flat of the parents, who at the time still were in a state of blissful ignorance, was attacked. Two children were placed in a crisis centre. The eldest child, 9-year-old Lisa who was not at home escaped the fate of her siblings. However, after a month and a half two big guys from social services came again to take Lisa. She huddled under the bed and refused to leave her refuge, telling them that she will not go anywhere with them because she loved her parents and understood that her two brothers have already been removed and have not been returned. “It’s not fair!” she cried out with all her childish sincerity and straightforwardness. Strange as it may seem, it did work, and the girl was left alone. This polite conversation was now possible owing to interference of the family’s lawyer who tried to return the children back to their parents. As it turned out later, social workers do not have right to go against straightforward and univocal opinion voiced by a child. It is worthy of note that two sons removed from the family cannot speak out, since Matvey is only a 1-year-old, while Elisei does not speak due to his health condition.

Thus, Orphan’s Court and social services caused irreparable damage to the children, since Elisei was taken out of a specialized boarding school where he stayed on a 24-hour basis and received special care and pedagogical assistance. The youngest child Matvey, breastfed by Karina, was forcibly seized from his mother’s hands. Consequently, Karina lost her milk because of stress, while Matvey has developed asthma. No one has informed the parents where their children were taken. The parents got to know their children’s location only after a few days. The father was at home when his children were removed, but he could not oppose the punishers.

A protest held on the 19th of August has been timed to coincide with the hearing at Orphan’s Court on parent’s petition for restoration of custody and, correspondingly, the return of the children. Public activists Saulis Sheikis, Alla Sprishevskaya, Elena Kornetova, Oxana Beleckaya, Irina Bobkova, Vlada Grishkevich, Natalya Mihaylova and socially active parents came to support Karina Saliga’s family and voice their protest against violent methods of interference into families used by social workers who abuse their power, using intimidation, pressure, coercion into a so-called ‘collaboration’ as main tools of influence. If parents refuse to ‘cooperate’, they submit the case to the court.

At the moment, a public activist Irina Bobkova runs a high profile case of Laila Brice. On the 27th of August the court in London will conduct a trial where there will be an attempt to legalize the crime committed against Laila’s family. The UK’s social services are trying to legalize her daughter’s abduction, giving up the girl for adoption to strangers. All this is taking place despite the intervention of Latvian Ministry of Foreign Affairs, Latvian Ministry of Justice and even the president of Latvia Andris Berzins.

The defense team at the hearing held on the 19th of August concerning the Saliga family’s case consisted of the family’s lawyer, members of Dzimta – Elena Kornetova and Oxana Beleckaya, as well as Karina’s mother-in-law who was sent out from the session hall in blunt terms because of her angry comments voiced straight from her place. Children have not been returned to the parents. The parents received additional terms of ‘collaboration’. Nevertheless, owing to effective interference of activists belonging to resistance movement of parents it was possible to achieve a constructive dialogue with representatives of Orphan’s Court who promised to convene an extraordinary session re immediate return of the children after parents will present all specified documents.